The art of smiths and locksmiths does not stand behind any other genre. It plays not only a leading role in the industrial and handicraft histories, but also has its important place in the artistic and cultural histories of our land. This small art walk should show not only wrought iron works, but also give an insight into the art of metal casting. The starting point of our city walk is the Viennese City Hall. 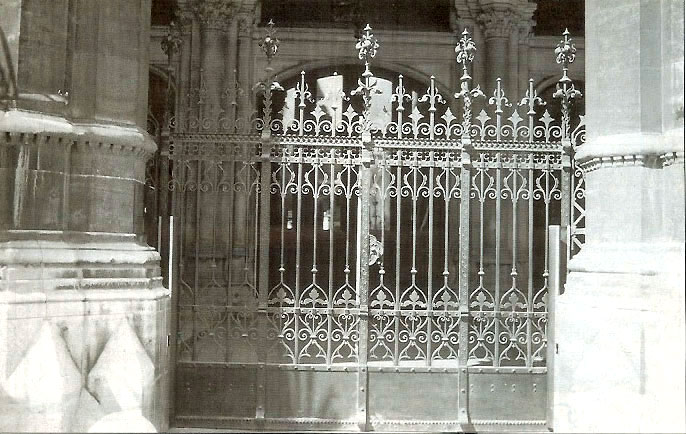 The city hall is built in new-gothic stile by architect Friedrich v. Schmidt. The building process lasted from 1872 to 1883. A walk around the building is worthwhile. One can observe lattice gates and window grates made by different art locksmiths. The 3-part main entry lattice gate on the south side of the city hall (Lichtenfelsgasse) was made by Albert Milde and given as a gift to the Viennese municipality in 1883 on the occasion of the keystone lapping and for own advertisement.
The following is written on a sign at the upper end of an astragal: “Geschenk von k. k. Hofschlosser Albert Milde in Wien “ (“A present from k. k. artistic wrought-iron-smith Alfred Milde in Vienna”). The next two entry gates are from Anton Schwarz. Unfortunately, the other gates and window grates cannot be assigned perfectly, because no markings exist. Only two next entry gates in Lichtenfelsgasse are recorded in the construction acts.
(Three lattice gates at the city hall as a present) 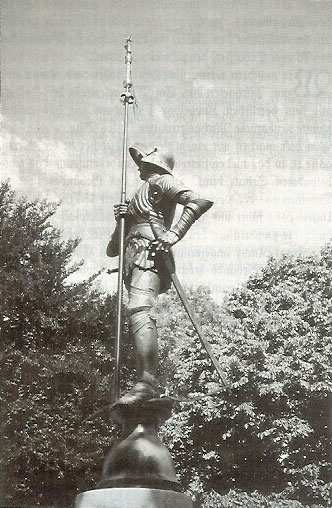 On a top of the City Hall there is the Rathausman sculpture, which was made by the well-known at that time locksmith’s master Ludwig Wilhelm and Alexander Nehr, and then given to the municipality of Vienna as a gift. On the occasion of Rathausman’s renovation in 1986, professor Fritz Tiefenthaler has made its exact copy, which stays nowadays on the City Hall Square. The highest point of the city hall with the rathausman is 103.3m. The armament of the Rathausman was made from 4 mm copper. It is 5.4 meters tall (3.4 meters without his flagpole) and weighs 650 kilograms. From City Hall Square we proceed to the Volksgarten and Burgtheater.
(110 Jahre Wiener Rathausmann.pdf)

The fence around Volks- and Burggarten 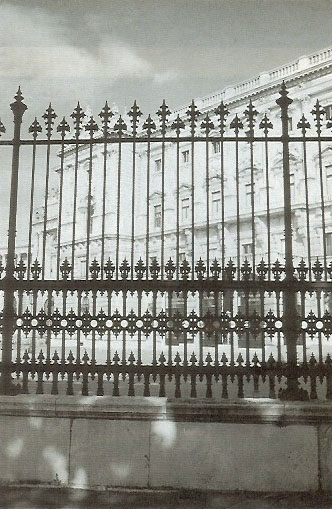 The Voksgarten has been designed by the garden architect Friedrich Obmann from 1821 to 1823 and was opened on 1st of March 1823.After the replenishment of the city’s Graben, it was considerably extended. The massive fence around the Volks- and Burggarten has been established in the years from 1863 to 1864. 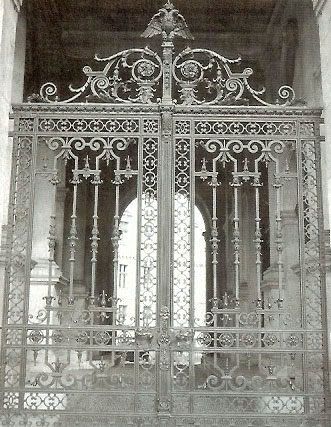 Albert Milde’s lattice gate of the University’s side entrance 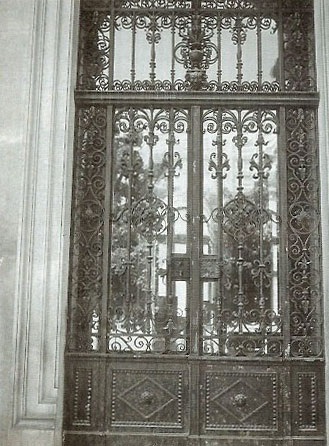 The University has been built by the architect Heinrich Ferster in the years from 1873 to 1883 in Italian Renaissance style. The main entrance lattice gates were made by Albert Milde.
(Three lattice gates of the University, 1884)

New-baroque lattice gate of Palace Sturany made by Albert Milde 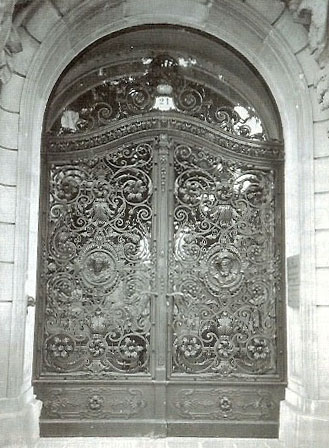 The house of Mr. Sturany has been built from 1878 till 1880 by the architects Fellner and Helmer and is located near the Ringstraße (Palace Sturany, Vienna I., Schottenring 21). It is the first building in Vienna that shows the fully unfolded baroque forms. This Palace has an exceptionally beautiful entrance. Mighty atlantes are holding the bow window and the crowns of the new-baroque Albert Milde’s lattice gate. During the implementation, special attention was paid to the locksmith's works. “This so professional lattice gate of Albert Milde influenced his ancestors so much, that from this time such gates became very popular“. The Medallions were produced according to the models of Rudolf Weyr. The stairway is decorated with the stair railing and door furniture artistically made by Albert Milde.
(New-baroque lattice gate of Palace Sturany, 1880) 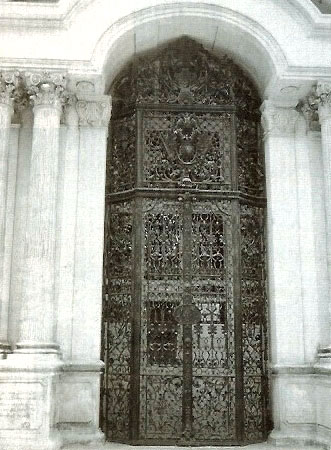 A short walk crossing the Augarten bridge brings us to the Wilhelm-Kinzel Park. Here is situated the Johannes chapel with its baroque window grate and beautiful entrance gate, made in 1738. Unfortunately, the creator of this amazing smith's work is unknown.

Wrought-iron lattice gate of the south tower’s entrance at the St. Stephen's Cathedral in Vienna 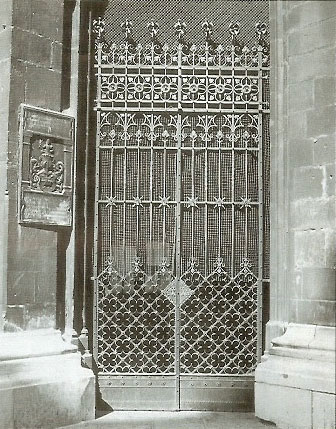 With a metro we reach the St. Stephen Square, where we first visit the St. Stephen’s Cathedral. This gothic church was dedicated in 1147 to the bishop of Passau. Many cathedral master builders have used it as an example in their works. Particularly, the heavy baroque wrought iron gate of the prince's Eugene's chapel which was created in 1731 by an unknown master is worth to be mentioned here. In addition, it is necessary to highlight the wrought-iron grade at the canteen, which is unfortunately seen not very well. The lattice gate at the south tower’s entrance was originally made by Anton Biró and reconstructed after the Second World War in a similar style.

Bronze Entrance Gate of the Equitable-Palace 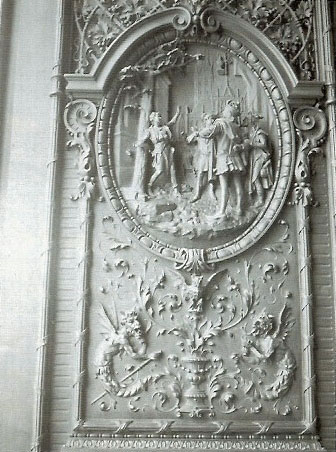 We proceed further to the Stock-im-Eisen-Platz 3-4 to the Equitable Palace. It has been built from 1890 to 1891 by Andreas Streit. Especially interesting are both bronze door wings made by Rudolf Weyr. In two medallions the history of Stock im Eisen is presented. In the corner niche of the palace there is a landmark of Viennese locksmiths - "Stock im Eisen" (tree trunk). According to legend, every locksmith's apprentice who came to Vienna in the course of his wanderings had to hammer a nail into the tree trunk. 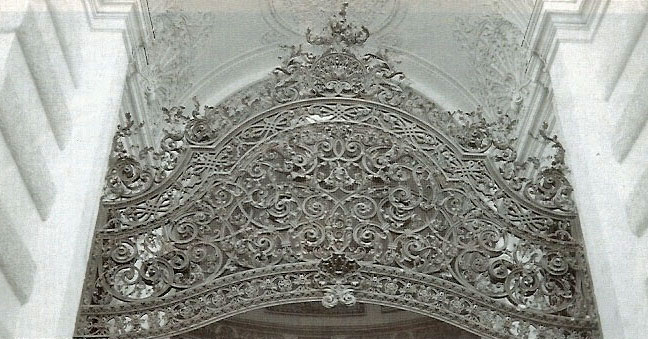 We walk further through the Graben and Kohlmarkt, to the Michaeler square. In the Michaeler Passage of the Hofburg with magnificent domed structure we face the world-famous new-baroque Michaelertor (Michaeler Gate) of Anton Biró. 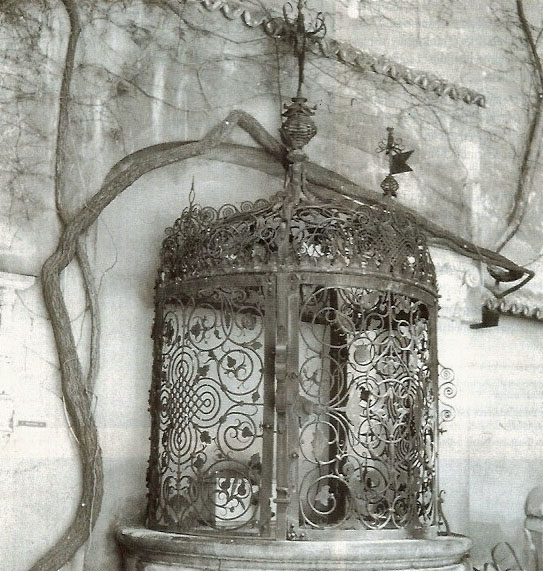 From here we make a small detour to the Lower Austria Land Museum in Herrengasse 9, where a special treasure is. The yard of this building is decorated with a fountain from High Renaissance times. It was made in 1570 by unknown master.

Our way leads us back to Michaelerplatz and further through Hofburg to Heldenplatz. Here we are impressed with the beautiful entrance gate of the castle made by Franz Knotz. An impressive double eagle with a crown, made by Alexander Nehr, crowns the building.
We cross the Ring and are in front of museums. The fence of the park is made by Johann M. Baierlein, the candelabra by Albert Milde. A tram brings us to our next destination, the Upper Belvedere.

The Upper Belvedere has been built in baroque style from 1721 to 1723 by Johann Lukas of Hildebrandt. The famous baroque park gate was made in 1723 by unknown master.

New Baroque Lattice Gate of the Springer Palace made by Johann M. Baierlein

With the visit of the house at Schwindgasse Nr. 6 our walk is almost ended. The Springer Palace was built in new baroque style and impresses us with the artistic wrought iron gate made by Johann M. Baierlein. 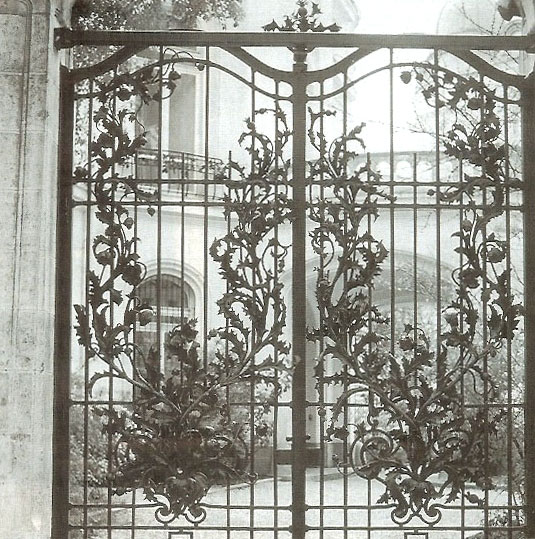 Our last destination is the French Embassy on Schwarzenbergplatz Nr. 12. It has been built from 1906 to 1909 by Georges Paul Chedanne in French Art Nouveau style. The both lattice gates were made by Balerian Gillar, and the naturalistic cupellation by Alexander Nehr.
We have reached the end of our small art walk, and I would be glad if you liked it as much as I did.
(Reprints: Small Art Walk.pdf)