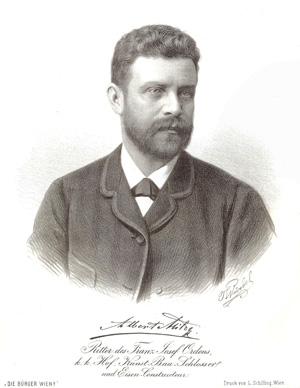 With an increased prestige of the art profession towards the end of the 1860-ties, Albert Milde was recognized for his extraordinary ability and work. Due to enormous efforts, his sales considerably increased. 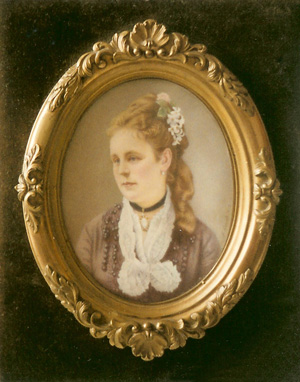 Albert Milde has married on November 3, 1864 Josefine Pohl in Gross-Enzersdorf. Together they had 6 children. On September 21, 1865, their first son, Albert, on November 25, 1866 their first daughter Josefine, and on June 27, 1871 their daughter Maria were born. 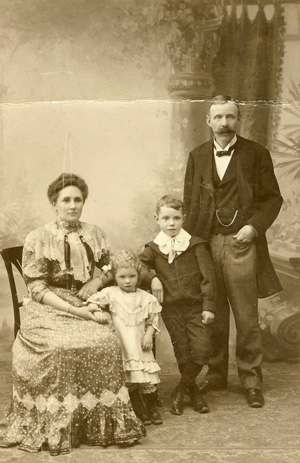 Spectacular new private and public building projects as part of the expansion of the city of Vienna influenced Albert Milde to devote his time even more intensively to the artistic wrought iron smith trade, which Anton Biro had reanimated. Together with this Viennese master, Albert Milde is considered as one of the most outstanding restorers of the figurative and ornamental iron-smith art in Austria.

In later years Albert Milde carried also general construction works. For instance, he built roof trusses, beams, iron staircases and bridges. At the time of the World Fair in Vienna in 1873 his business was considered as one of the most outstanding in the useful arts and techniques. 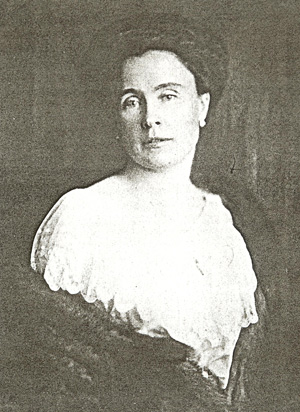 His participation in the Paris World Fair in 1878 contributed to the prestige of the Viennese smith art also in foreign countries. For his unquestionable meritorious services Albert Milde was honored with the Franz Joseph-Order (medal). However, already then, as some of close acquaintances knew, his outward and personal achievements were greater than his business successes. As a member of the tradesmen’s union of Lower Austria, to which he belonged with sacrificing devotion, he participated passionately at the industrial exhibition in 1880 and later at the exhibition in 1888. At that time, Albert

Milde organized a common exhibition of the works of the Viennese metal-art-smiths and building-smiths, which became a splendid representation of the Viennese smith- trade in general. A frank word, which he dared to direct to the Imperial Majesty when his Majesty visited this part of the exhibit, was held against him in some circles, namely that the business returns were not in proper relation with the outstanding work of the Viennese metal smiths due to the circumstances of the time. 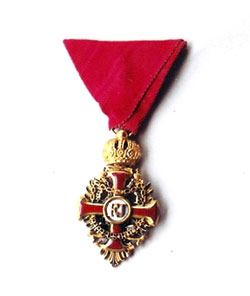 After the jubilee exhibit, at the beginning of 1889, Albert Milde accepted a position as town councilor, but never excelled in this capacity. Soon, he left this mandate as his financial difficulties had become general knowledge.

At the beginning of 1890 he had to apply for a moratorium (postponement of accounts due). Shortly afterwards, his company became insolvent. His company became then a new name “Albert Milde & Co.” under the new ownership of Adelbert Kurz, a Swiss native of the Canton Aarau. In this new firm, Albert Milde was only a coworker and around 1899 he had to dissociate himself even from this activity. This was most certainly extremely hard for him. To a certain degree he was not a businessman as he was not able “to count money”. His generous heart, open hands and also pride contributed towards the collapse of his business.

However he was always diligent. As he had to give up a possibility to work because of the age, illness, relationships, he became surly and sad. 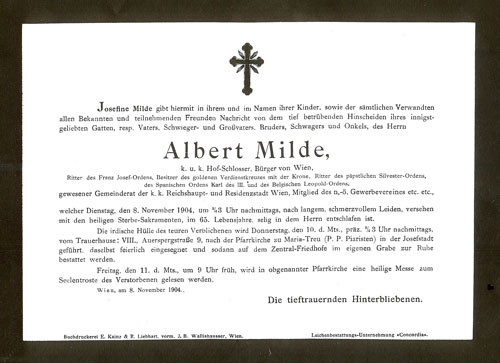 His remarkable personality will always be an important part of Viennese history of metal smithing and civil engineering. As a person, Albert Milde was very handsome and attractive; everybody, who knew him would leave only friendly memories about this bright person. It has hurt him mostly that he, always the first at job, now was pushed aside of work and achievements. The life reach on gloss and success, but also on disappointment and bitter came to the end.

One of the most famous personalities of Viennese industry, owner of the biggest Art locksmith's shops and steel constructions manufactories, artistic wrought-iron-smith Albert Milde died in the age of 65 years on 8th of November 1904 in miserable conditions after he spent several years being paralyzed.

Albert Milde is buried on the Vienna Central Cemetery, 2 Gate, Group 16B, Row 4, Grave 17. The tomb was totally destroyed during one of the bombings in the Second World War.

Albert Milde was a real master of his guild.