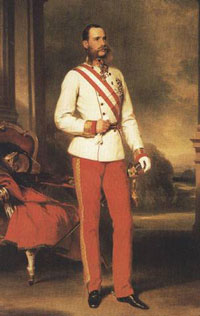 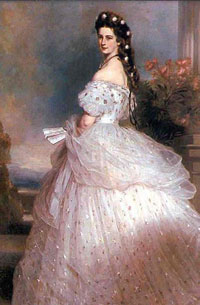 Empress Elisabeth
Franz Joseph was born in Vienna in 1830 and was the oldest son of the Archduke Franz Karl and his wife Bavarian Princess Sophie. Because the marriage of his uncle, Ferdinand I, remained childless and revolution disturbances made him to renounce the throne on 2nd of December 1848, 18 years old Franz Joseph ascended his position.

After a success over Prussians Austria, according to the Olmützer agreement of 1850, obtained the supremacy in Germany. The revolution was suppressed, Metternich returned to Vienna; also in Hungary the monarchy was restored with the help of tsarist troops. In 1854 Franz Josef has married Elisabeth, the daughter of Maximilian of Bavaria, who gave birth to his three daughters and to the throne successor Rudolf.

In 1859 began the war against Sardinia and France, and after a series of unsuccessful battles (Solferino in 1859) Franz Joseph had to sign the peace agreement in Villafranca and to resign Lombardy. The culmination of the war against Prussia in 1866 was the loss in Königgrätz battle, in which Austria lost his last bastion in Italy, namely the province Veneto, and the supremacy in Germany. In 1867 between Austria and Hungry the so-called balance was created, the birth of the Austria-Hungarian double monarchy according to the principle of dualism has not been realized. Hungary got its own parliament and almost complete autonomy, only army, finances, foreign affairs and the monarch were common with the motherland.

In 1878 Bosnia and Herzegovina were occupied; when Russia and England agreed in 1907 on the subdivision of Turkey, Austria-Hungary converted the present occupation into an annexation; the conflict between the monarchy and Serbia extremely intensified, and when the successor of the Throne, Franz Ferdinand, was assassinated on the 28th of June 1914 in Sarajevo, the war against Serbia was proclaimed. The First World War had taken his disastrous beginning. On the peak of war chaos, the old Kaiser has died on the 21st of November 1916 in Vienna.